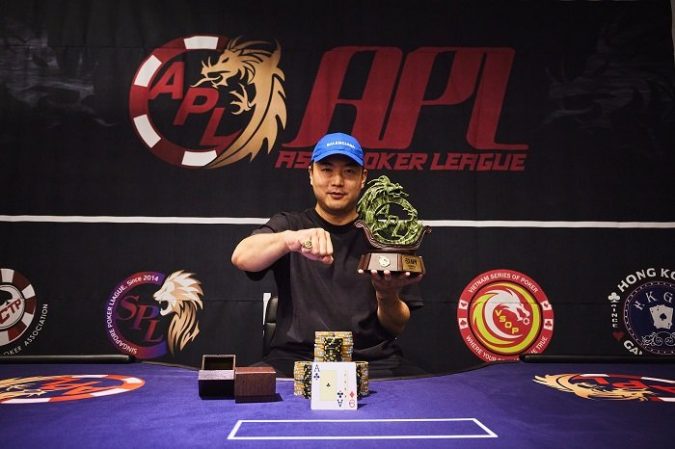 The month of June continues to be very busy and exciting for the Asia Poker League with an online event running at Natural8 – GGNet and a live event that took place in South Korea. We will have a final recap on the APL Online Series once it concludes on June 28th. The most important thing to know is there are still several trophies up for grabs including the event’s highlighted Main Event featuring a massive CN￥ 10 Million (~US$ 1,563,900) prize pool. As for cash, there’s plenty more to dish out with the festival guaranteeing a whopping CN￥ 80,000,000 (~US$ 12.5 Million).

On the live felt, the APL was back in South Korea on June 12 to 13 for their two-day High Roller Series at the Very Convention Center in Dongnam. Three events were scheduled, namely High Roller, Super Deepstack, and Deepstack Turbo. It drew a combined 592 entries and paid out a total of KR₩ 640,000,000 (~US$ 563,000). Emerging as the biggest winner was Korean pro Steve Yea who walked away with six figures. We’ve got that story and full event results down below. As one of the most well known players from Korea, the win came just two months after claiming the World Class of Poker (WCOP) High Roller event for KR₩ 62,800,000 (~US$ 55,670). These wins were his only two live cashes so far this year but with more events coming up, it is likely that we will see Yea continuing his dominance.

Backtracking further, before the novel coronavirus struck, Yea was busy on the live felt in 2019 collecting 20 cashes from around the world. His biggest score that year was at the Los Angeles Poker Classic US$ 10K No LImit Hold’em WPT Championship Main Eventwhere he placed 6th for US$ 201,650. Another impressive result was at the WSOP $1,500 No Limit Hold’em – The Closer finishing 8th for US$ 61,834. His final cash that year was a victory at the Asian Poker Tour (APT) Manila High Rollers event for PhP 948,900 (~US$ 18,238). To date, Yea’s largest career cash was at the APT Macau 2008 US$ 5,300 buy-in event, finishing in 2nd place for US$ 250,000. Yea is ranked 5th in the Hendon Mob’s Korea All Time Money List with nearly US$ 1.2 Million in earnings.

Among the 35 players that reached the money was Jeon Seung Soo (3rd) who made his mark in the APT live circuit with multiple wins that included two Main Event titles. Others to mention were Tae Hoon Han (6th), Soo Jo Kim (12th), Daewoong Song (24th), and Yo Hwan Lim (31st).